In deploying the manuals, the different stages of our process of analysis consist of identifying, evaluating and describing the pathos scenes.

Stage one is the identification of pathos scenes. At first, scenes are determined as temporal segments within the film. These segments are then classified as instances of pathos scenes. This classification is guided by the manual with regard to plot constellations and forms of cinematic expression

Stage 2: Evaluation of pathos scenes as poetics of affect

After three scholars individually identified and classified the pathos scenes of a film on stage two, we evaluate the accordance of their findings. For this the scholars record time-code based scene logs. These logs are checked for consistency of temporal segmentation and categorical differentiation. Following a strict procedure ,the individual logs are merged into a master log comprised of the conformed data from the individual logs.

The master log is then transcribed into a diagram. It represents a single film’s macro level of the poetics of affect. From left to right the diagram visualizes the temporal distribution of the pathos scenes over the course of the film. The colored boxes represent the categorical classification of scenes. By comparing the diagrams we can recognize the re-occurring patterns. The degree of variances of the patterns indicates the historical variations in the war film genre.

Thirdly, we describe the scenic composition and the expressive movement units. As defined in a second manual, we focus on the dynamic patterns and expressive movement. Central objective of the manual is to guarantee a systematic and intersubjective form of description provided by a predetermined order of analytic steps. 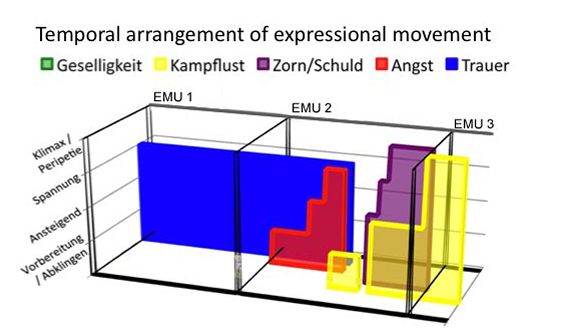